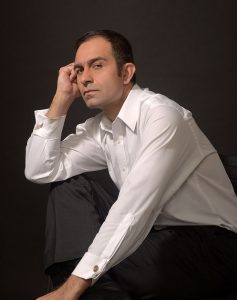 Aleksandar Simić was born January 22nd 1973 in Belgrade, in what was then Yugoslavia. From his earliest days, the family residence constantly shifted: from Bremen to Singapore, from Rome to New York, and not surprisingly, so too did his fields of interest – from art to biology, from literature to physics.
Music, however, was not counted among his talents. Albeit the fact that he was reading and writing before the age of three and that he was exceptionally gifted for natural sciences, he had a distinctly bad voice and a very poor pitch. Actually, he was often told, even by those who loved him, that he could probably do anything in his life – except become a musician. And he wasn’t really bothered…

Then, one day, just couple of weeks before his 15th birthday, the young man received an unusual and, as it proved, a life changing gift. It was a CASIO calculator. A simple electronic abacus with a funny add-on. If chosen, the pads became a part of an octave and a half wide “keyboard”.  The 0 key became a Do, the 1 became a Re…and so on… As it showed, it was his first chance to prove he wasn’t such a lost case, and he took it. In fifteen minutes he had a “repertory” of some 20 different tunes. Weeks later he was still inseparable from his calculator and his parents decided to get him a really big one. As the 6 ft Steinway entered their home, Aleksandar taught himself how to read music and very soon realized he can sight-read practically anything. At the age of 16 he was already playing the late opuses of Beethoven’s piano sonatas, and as he says himself  “…was practically devouring scores and books on classical music ranging from music history to orchestration and counterpoint”.  Still, he was labeled “too old to start school” and he had no other choice but to continue his belated musical journey on his own…

Five years later, following a bet, and half way through medical school, he took the entrance exams at the Belgrade conservatory, and although self-taught and lacking a single day of formal musical training, placed first among all the applicants. Being finally given an actual acknowledgement and approval to his musical aspirations, all his dilemmas concerning the choice of craft were dissolved. Since then, it was all about music. His opus expanded rapidly and in the years that followed he established a reputation as one of the leading classical composers of his generation by pouring his unique personality, his bold, innovative ideas and his love of life into his music.

To give you a hint, we present here a short list with some of Mr. Simić’s more acclaimed works:

Simić’s music has also been used to mark numerous other official events, such as the UN General Assembly Sessions, the Tercentennial of the city of St. Petersburg, Bicentennial of the Serbian state, Nikola Tesla’s 160th Birthday, 40th Anniversary of the Fulbright Foundation, European Union Jewish Cultural Heritage Days, Ecumenical gatherings of the Eastern Orthodox Patriarchs or Planet Earth Day.

Besides his classical opus, which encompasses hundreds of pieces in all genres, ranging from solo, chamber and vocal works, to grand scale pieces for the symphony orchestra or choir and orchestra, he wrote more than 30 different soundtracks for various theatre plays, television shows or documentaries.. His debut feature-movie OST was for the “Optimists”, directed by the celebrated Serbian/French director Goran Paskaljević, and screened in prestigious film festivals such as Tribeca and Montreal.

In 2005 he founded a chamber ensemble called Aleksandar Simić & The Seraphim. The initial Belgrade based ensemble has since been emulated by the composer himself, in places like NYC, London, St. Petersburg, Lisbon, Turin, Hamburg or Delhi. The group performs exclusively Simić’s own music in a constant cross-over between contemporary classical and various other musical styles, such as tango, byzantine, klezmer, jazz or Broadway. Simić has also been a composer in residence with a number of symphony orchestras, over the years.

His music production company called “The Association for Promotion and Popularization of Classical Music” has also been established in 2005.

Finally, it is important to mention that besides music, an important part of Simić’s life is and has been his commitment to social advocacy.

Year after year he has been acting as a spokes person and activist for some of the most important charity campaigns in Serbia such as Helping the Blind, Program Safe House or Notes from the Heart, initiated and headed by the Svetlost (Light) Foundation.

He is an occasional guest lecturer at the Faculty of Political Sciences in Belgrade, teaching Political Philosophy and Peace Studies.

His contribution to the global inter-religious dialogue has been significant over the many years and in many different countries, and also as a part of the Pave the Way Foundation from NY that focuses on creating bridges between the global Jewish and Christian communities. Since 2010 he has been on the board of the East-West Bridge, an NGO based in Belgrade which since 2012 has become an official Serbian Chapter to the Trilateral Commission.
Since 2007 Mr. Simić has been assisting the Simon Wiesenthal Center and Serbia’s Special Prosecutors office for War Crimes in the Operation Last Chance program, trying to expedite the work of Serbian, American and Hungarian administrations in bringing before justice the last remaining war criminals from WWII.

Since 2010 he has on a regular bases been involved with the UN activities in many different countries and regions, assisting mainly to the UN Alliance of Civilizations Initiative, but also to the offices of the several sessions of the General Assembly and many different other UN agencies and programs, as well as the office of the Secretary General.